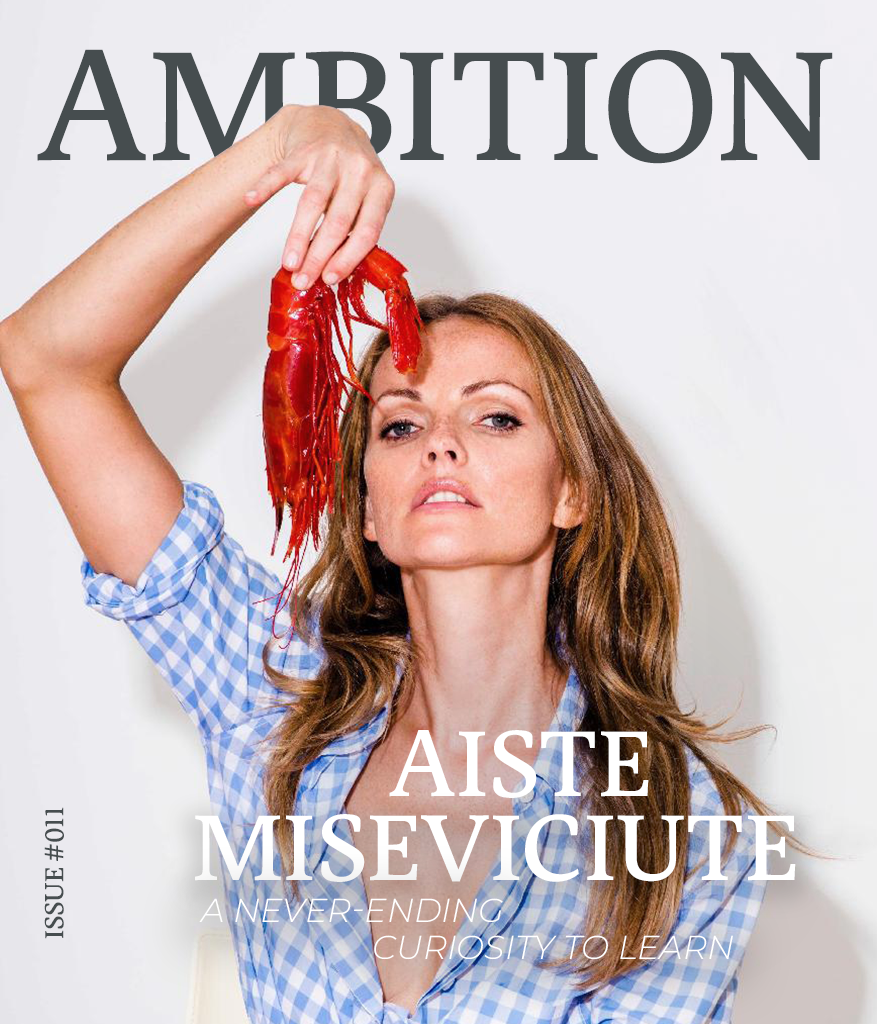 "For me, trust and integrity are the most important in what I do."

For Issue 11 of AMBITION, we had the pleasure of speaking with the powerhouse behind Luxeat, Aiste Miseviciute. The ex-supermodel turned food writer and founder shares her thoughts on where hospitality will go next, as well her top 3 most memorable restaurant experiences ever.

Where does your AMBITION come from?

From love for what I do, and from a never-ending curiosity to learn and to know more.

You’ve previously said that behind every ingredient, dish and restaurant, there is always a fascinating story and an exciting personal quest. What’s yours?

I was very fortunate to be immersed in the universe of creativity and travel the world at a young age. I started modelling and moved to Paris when I was just 18 years old. I shot with some of the world’s best photographers for magazines such as Numéro and Vogue. I started my blog, which at that time was called “Who said that models don’t eat?” while I was living in NYC 17 years ago. What in the beginning was just a hobby turned into a lifetime passion, and eventually a job.

The creative worlds of fashion and food often overlap. As someone who has transitioned from the world of modelling to the world of gastronomy, what are the similarities between the two industries?

It’s very interesting as both things - eating and dressing -  are basic human necessities. We don’t really need to have fine dining meals or buy new, expensive clothes every season. Whether it’s a Michelin starred chef or a fashion designer, I think the main similarity is craftsmanship and artistic genius expressed through their professions. The difference, though, is that it can be easy to replicate something in fashion and sell it all around the world, while in gastronomy, the chef must still be in the kitchen and cook a meal, something that can be served only at a certain time in a certain place.

What does luxury mean to Luxeat?

Quality, artisanship, tradition, and a story behind it. It’s the opposite to anything that’s flashy and expensive just for the sake of being expensive. Understanding and appreciating what you’re experiencing is very important, too.

How have you been able to cultivate such a loyal and engaged online community?

I’ve never really done sponsored posts, and I share only what I really believe in. For me, trust and integrity are the most important in what I do.

Your recently launched brand, The Artisan’s Box, offers exceptional ingredients produced by the world's best artisans. What inspired you to create it?

The Artisans’ Box is the result of years of traveling, eating, tasting, and getting to know producers and artisans from around the world. With this box, I aim to tell a story of the “skilled hands” who dedicate their entire lives to creating something exceptional, never compromising on quality or excellence. Whether it’s honey cultivated by 3 Michelin starred chef Emmanuel Renaut or award-winning olive oil, I want to make sure that the box contains only the very best ingredients in each category.

With the world of fine dining constantly elevating and evolving, what do you think the future of hospitality looks like?

From what I can observe, there are two paths hospitality is taking at the moment. Now more than ever, Michelin starred “celebrity” chefs or established restaurants are turning into “chains” and opening their outposts everywhere from Dubai to Saint-Tropez. It’s a bit of a soulless, only-for-profit system that caters to certain clientele who don’t really care about authenticity.

For me, the second “lane” is much more optimistic. More and more talented and independent chefs are opening their restaurants, are always in their kitchens, and are focusing on their craft in order to deliver the best experience to their clients. I think the future lies in looking at all the elements within the restaurant's ecosystem. Not only working with the best and most sustainable suppliers, but also taking care of your staff and rewarding them properly.

What are your tips for those who want to eat perfect, high-quality ingredients but can't necessarily afford to dine at the best restaurants?

I think it’s all about making time to research and buying from small, independent artisans and producers. For instance, the best olive oil doesn’t have to be expensive (a lot of the time what might make it expensive is just the fancy packaging), it’s more about knowing how to recognize good olive oil. Surprisingly, I have found bad, faulty olive oil even at Michelin starred restaurants. Also, this might sound like a cliché, but eating seasonal and local is the best way to have an excellent meal at home without spending too much money. Having lived in London for more than 7 years now, I find that British people underestimate what they have here. The seafood here is world class and there are also so many producers of excellent artisanal bread, cheese, butter, smoked salmon, honey, and so on.

What are your top 3 most memorable restaurant experiences ever?

That’s an impossible question but I’ll try to answer!

My first fine dining meal 21 years ago was at 2 Michelin starred Apicius in Paris. The dinner, which was for my birthday, had opened a whole new world and completely changed my understanding of food. I still remember a dessert called “tout caramel,” which was like nothing I’d ever had before.

Lunch at 3 Michelin starred Sukiyabashi Jiro in Tokyo, which is run by the now 96 year old sushi master Jiro Ono. It was eight years ago and I went there alone for lunch. Despite the fact that it was really a difficult reservation to get, I was also very stressed as the legendary Ono-san is known to be rude to foreigners. I was there alone at the counter, with just the master and his son Yoshikazu making sushi for me. In the end they were both very nice to me and we even managed to have a laugh.

Finally, Tacos al Pastor at a nameless tacos stand in front of the Red Cross in Mexico City just a few years ago. These tacos, that cost maybe 50 cents on a dusty street, opened a whole new world of sensations for me. Umami, bitter, sweet, sour – that taco was an explosion of flavours and a very brief moment of time I will never forget.

If you had a microphone and the whole world was listening, what would you say?

If you have a choice, choose small producers, artisans, independent restaurateurs, and chefs who are always in their kitchens. They need your support and often you’ll have a more rewarding experience.

Where will Aiste Miseviciute’s AMBITION take her next?

I am very excited to work on The Artisans' Box this year. I would also like to create a Luxeat Guide and finally master my Japanese!

Thank you so much Aiste of Luxeat for taking the time to speak with us! Be sure to give Luxeat a follow and subscribe down below for more AMBITION!

Thank you! Your submission has been received!
Oops! Something went wrong while submitting the form.

Thank you! Your submission has been received!
Oops! Something went wrong while submitting the form.
view article